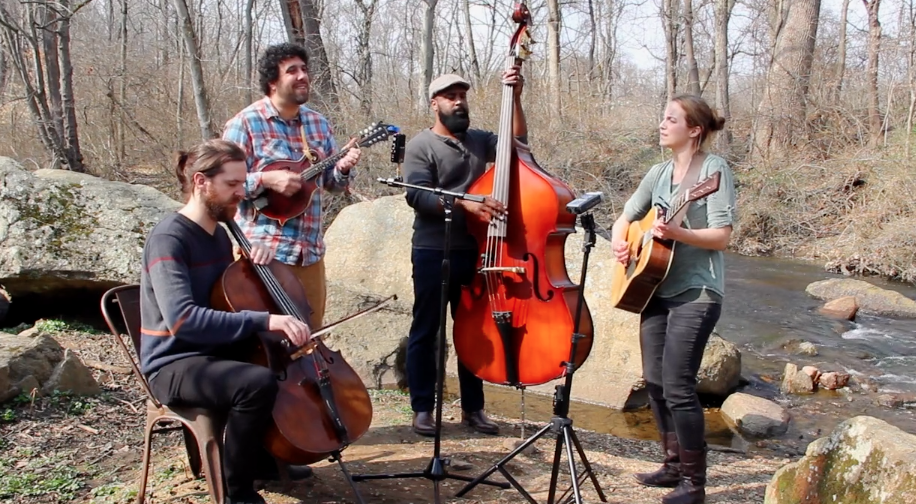 Instagram is normally a place for memes and ex-reality stars turned social media “influencers”, but for me, it’s where I find a lot of new music I dig. So many musicians out there are doing some seriously cool stuff and putting it on Instagram. Among them are the Philadelphia-based folk, Americana and indie rock influenced group Under the Oak.

When the minds, souls and talents of Maggie Pope, Adam Monaco, Chris Peace and Peter Oswald come together, Under the Oak comes to life. Their camaraderie and their humanity are gravitational and infectious. Their debut album, “Big Sky”, was just released via Winding Way Records this month out of Wayne, Pennsylvania.

When I first stumbled across them I fell for how authentically genuine their spirit was. It was immediately noticeable in the videos of them jamming together in intimate spaces like their living rooms, garages or just out in nature. Another thing I loved was how they promoted the release of their album. It was just as human and genuine as their music is. There were no intense hype videos or over-the-top artsy photography shoots. It was only raw videos and photos of the band doing what they do best — playing music, joking and spending time with each other. It created an intimate and authentic experience that I appreciated. Their social media boasts: “We like nature, our moms, and bluegrass.” Simply put: Under the Oak is the real deal.

Strings and harmonies for days

Under the Oak are incredible string musicians with harmonies that can leave you feeling emotional. The arrangements and intricacies they exhibit via mandolin, upright bass, cello, and guitar create a vivid experience you don’t only hear, but you also feel at the same time.

In the first single off of the album “Big Sky” called “Beautiful People,” you’re lead breathlessly through the methodical highs and lows of each guitar strum and upright bass rhythm. The mandolin adds air and light to this track, while the cello heavily packs in the emotion. All of this is intensified once the group starts to harmonize. You can hear how passionate they are as they release a sound that is so organic and genuine, you feel as if you’re a part of the moment they are creating.

Their track “Take in the Spring” made my stomach and heart drop. Maggie leads the vocals that set a solid foundation for the track, and she’s met with beautiful harmony by her bandmates in the chorus. Adam’s delicate, yet ferocious mandolin skills create a sense of electricity. This is echoed and controlled by Peter’s intense and long cello expressions that fill the song with heavy warmth. The track is held together by Chris’ strong and structured, yet fluid upright bass skills.

Not only are they strong musically, but they’re lyrically poetic. Much of what they create is inspired by nature — the sea, the sky, the moon. It’s no surprise that their first album’s name is “Big Sky”. They use this in a way that’s gripping.

“I’ll be the moon, I’ll be the sun, howling out over the blue, over the sea, pining for you.”

Ok. Just take my heart and my money now, guys. It’s cool. If you happen to be in Wayne, Pennsylvania on April 28, you should make your way over to 118 North for their album release show of “Big Sky”. If not, take a listen to their stuff below and follow them on social media.

I will not go. I'll be the one. I'll be the moon, I'll be the sun… howling out over the blue, over the sea, pining for you. * A day of finding harmonies, lyric writing, hot tea, and questioning the spelling of "pining"… all while dodging nerf darts. It was a good day and good UTO #bandrehearsal. But we missed our bud @chrispeacemusic 😩 * Looking forward to this Thursday night @bourbonandbranch… we are excited to be opening up for @franceslukeaccord … they are good, y'all. And on tour right now so follow them for some good music and tour updates 👍🏼 * * * * #folkmusic #americanamusic #songwriting #undertheoak #music #cello #mandolin #songwriter #songs #acousticguitar #indiemusic #harmony #countrymusic #phillymusic #instamusic #livemusic #adammonaco #maggiepope #musicheals #musiclive

2 Replies to “Under the Oak: Folk for the Soul”